I’ve fallen a bit behind in keeping the website up to date with my latest cakes so I’m adding the most recent two together.   A white chocolate mudcake covered with white chocolate ganache and coloured fondant then decorated with a hand modelled Mario topper and plenty of Mario decorations.

The second cake is a NSW Blues football.  A milk chocolate mudcake hand carved in the shape of a football, covered in milk chocolate ganache and covered in fondant.  All decorations on the cake are hand cut from fondant.

My second attempt at a football! This cake was for a client’s father who loves football and wanted a football cake for his favourite team, the Bulldogs.

A dark chocolate mudcake which was hand shaped like a football.  I have to give my husband some credit here as he helped me with sculpting the shape.  Once sculpted, the cake was covered in dark chocolate ganache and left to set. Next for the fun bit, covering in fondant. Colouring, cutting and covering for hours!  I was happy with the end result and judging by my client’s reaction, they were too!

Thanks Kym for allowing me to create a fun cake for your dad!

s right, I’ve been biten by the cake pop bug and I think I love them!  Cake pops are awesome!  At Christmas time my niece and I had a go at some Christmas truffle pops which is basically the same thing but using a truffle recipe instead of cake.

Coming up to Easter and having just done Tahnee’s cake, I had the tops of the cakes left over and some ganache so thought…..why not try some cake pops?  Man, I’m glad I did!  I originally thought they would be sickly sweet and honestly I wouldn’t want to eat more than one but they are definately worth it!

Using the tops of the cakes I already had, I made boysenberry & peppermint cake pops.  The process was easy.  Crumble up the cake, mix with some ganache (a little at a time so you don’t add too much).  Once the mixture holds together nicely, roll into desired shapes, place on a board and refrigerate.  I left mine in the fridge for a few hours so they were nice and firm.  I then melted white chocolate for the boysenberry ones and dark chocolate for the peppermint ones.  I placed a lolly pop stick into the ball of cake pop (using a little melted chocolate on the end to hold the stick in place), covered the ball in melted chocolate and covered with desired decorations.  I used every sprinkle I had in my house (which is a little exciting because I can now go and buy some more for next time around

As I already mentioned, the end result, delicious!  There are plenty ( and I mean plenty!) of tutorials on the web for step by step instructions. These things are only limited to your imagination, so many designs and shapes that can be created.  They look great and taste even better! Give them a go!  Happy cake popping

This weekend’s cake was for a little girl’s 1st Birthday.  Her mum had an exact idea of what she was after and hopefully I accomplished the correct end result for her.  She was after a two tier, chocolate mudcake with a pink & purple theme topped with a little tiara for her little princess.

My first ever hand modelled baby! How exciting!  My clients was after a Christening Cake for their youngest daughter.  They were after a chocolate mudcake with the colour theme of white, soft pink and a bit of silver.  They wanted a slight religious feel to the cake by adding a cross, a baby on top and the name and date on there somewhere.

) with white fondant.  I hand modelled my very first baby and covered her with a blanket.  I used a great tutorial on You Tube to show me how to do this.  I put a silver cross on the side of the cake for the religious feel and followed through with the pink & silver theme with some pink & silver fondant balls around the bottom of the cake.  I finished the cake off with the name and date piped on top. Hope you had a lovely Christening Day Annabel 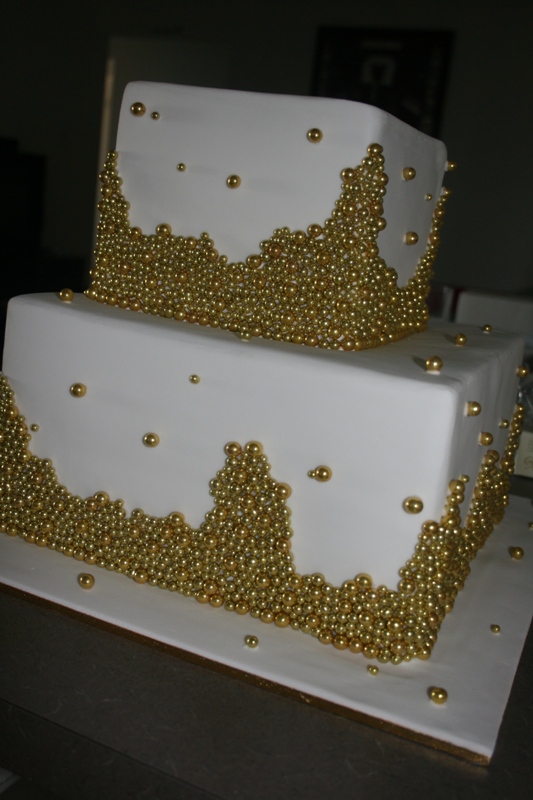 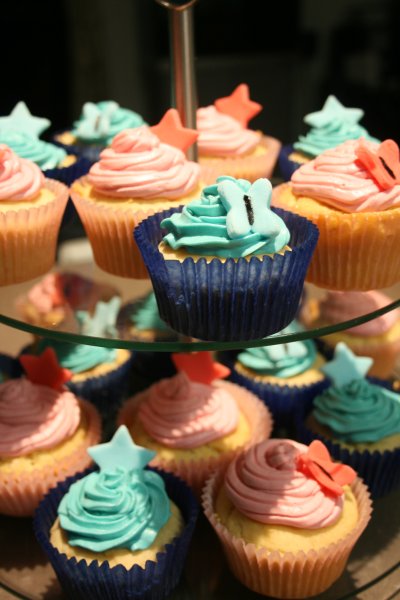